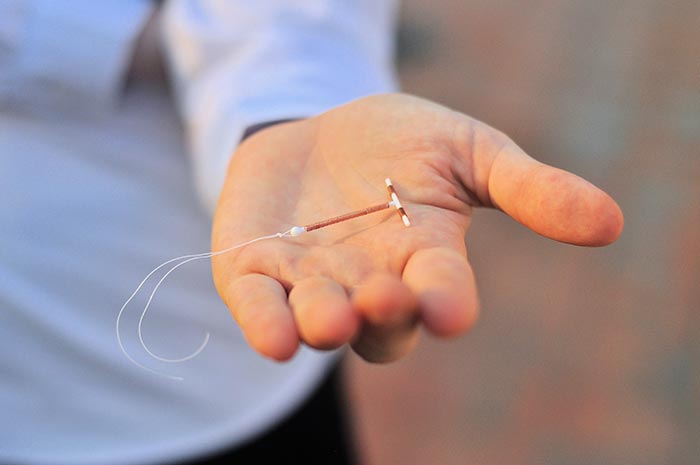 There are two types of IUD, non-hormonal and hormonal:

With a non-hormonal IUD, the plastic T-shape is wrapped in malleable copper wire. The copper works as a natural spermicide, by affecting the sperm’s ability to move, increasing white blood cells and altering cervical mucus. Because copper IUDs are non-hormonal, they can be used in breastfeeding women without worry of passing hormones through breast milk. They can also be used as a form of emergency contraception because of their ability to kill off sperm that is present in the uterus. Silver IUDs are also available but not nearly as common. Non-hormonal IUDs are the longest lasting and will work for up to 10 years.

Hormonal IUDs are not wrapped in any sort of element. The plastic IUD contains a small amount of levonorgestrel, a form of progestin. This hormone works by thickening the cervical mucus, which makes it impossible for sperm to pass into the uterus. Hormonal IUDs also thin the endometrial lining, so they are often used to treat women who have heavy menstrual bleeding. Oftentimes, women using hormonal IUDs will find that their menstruation is much lighter and les symptomatic. Hormonal IUDs are useable between 3-5 years, depending on the brand and the individual physiology of the patient. Afterwards, they will need to be removed and replaced.

Who Should Use IUDs

IUDs are suitable for most women. They are a low-maintenance, reversible form of contraception that have very low failure rates. However, some women may be better candidates than others:

If you would like to know if an IUD is right for you, contact Women’s Medical Associates of Nashville today.