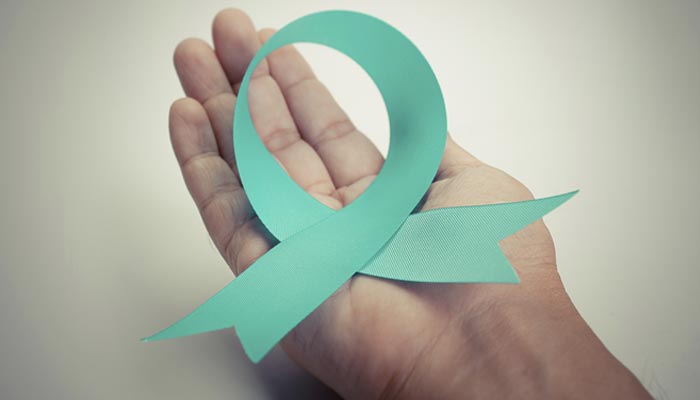 September is the month Americans have dedicated to increasing the awareness of ovarian cancer. Survivors, their friends and family, and every other person who wants to can all wear the teal ribbons, pins, and other signifiers to show their willingness spread knowledge of this disease. The more people know about ovarian cancer, the more can be done to find a way to fight it and the more chances women will have to survive this deadly disease.

Every year, more than 20,000 women are diagnosed with ovarian cancer, and over 10,000 will die from the condition. These statistics make ovarian cancer the fifth-highest cause of cancer-related death in women.

The length of time a woman can survive ovarian cancer is greatly dependent upon her age when diagnosed, as well as whether or not the cancer has already spread outside of the ovaries. Women under the age of 65 have a 58% chance to survive for at least five years after the diagnosis, and those older than 65 are only 28% likely to survive for five years. Even for cancer, these numbers are startling. If ovarian cancer is diagnosed in the early stages, before spreading outside of the ovaries, the five-year survival rate climbs to 92%. However, only 15% of cases are discovered this early.

The reason that cases of ovarian cancer are rarely diagnosed before the cancer spreads is because it presents very few symptoms. Symptoms become more obvious only after the cancer has spread beyond the ovaries. Even advanced stages of ovarian cancer can go undiagnosed due to the ease by which those symptoms can be mistaken for other problems.

Symptoms of ovarian cancer include:

Gynecologists check the ovaries during regular exams as part of their screening, but early stage cases of ovarian cancer are not detectible through this method. If you or someone you know is experiencing one or more of the symptoms mentioned above, inform your OBGYN so that he or she can decide if ordering more conclusive tests is necessary.

Ovarian cancer is a silent killer, but awareness may help us with the struggle against it. Please remember that September is Ovarian Cancer Awareness Month and help spread the word.